A Message from the Executive Director

In the beginning, the National Indian Council on Aging (NICOA) stood alone in the darkness with only a torch to light its way.

When we turn to one another for counsel we reduce the number of our enemies.” — Khalil Gibran 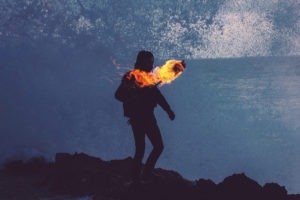 In the beginning, the National Indian Council on Aging (NICOA) stood alone in the darkness with only a torch to light its way. Not many understood its role, its purpose; its existence was marginalized. Many asked why it existed at all. Within the organization, there was a woman who understood its purpose and believed that one day others would too. That woman was former Executive Director Juana P. Lyon.

She was a formidable fighter, an intellect with an uncanny ability to understand and foresee the world we were to inherit. She understood that as Indian people, we need to stand up and fight for our rightful place in society. When I was a young person I worked with her and thought she was too abstract and at times, very demanding. She expected perfection and a devotion to what she believed to be the purpose of the organization: To ensure that the nation’s Indian tribes had a right to exist, complete with its languages, cultures, histories and traditions.

As a result, NICOA challenged the system and in 1978 walked away with the first social service program directly funded by the federal government — Title VI of the Older Americans Act, “Grants to Indian Tribes”. I know because I fought for its passage. I have always understood our purpose.

That belief still drives NICOA today. At this time in American history, the federal government is questioning whether our designation as “political entities” is a misnomer and determining whether we should be considered a racial group. There are still many struggles ahead.

The Indian elders of 2019 are very different than those of 1978. Those who are elderly now are of the “baby boomer” generation; they are the young men and women of 1978 who returned from the Vietnam war. Many are disabled, some are mentally challenged and every one of them is still fighting the aftereffects of that war.

We have young people who are addicted to drugs and alcohol, who are losing their language and forgetting their culture. Elders have a responsibility to ensure that we Indian people continue to exist and thrive. The National Indian Council on Aging must look to the future, assess it and identify its path. That path must include the young, the disabled, and those soon entering elder status.

We can no longer wait for the future but must act now to work with the young to ensure that the Indian elder of the future ages healthier and in wellness. We will do this by collaborating with other organizations, entities and individuals who share our common purpose. So when someone asks, “What has NICOA done for Indian tribes and their elders?”, we can tell them we continue to fight for our existence as Indian people.