Memorial Day is an American holiday, observed on the last Monday of May, honoring those who died while serving in the U.S. military. Veterans Day is commemorated in November and is intended to honor and thank all military personnel who served the United States in all wars, particularly living veterans. We use this day to acknowledge the many American Indians and Alaska Natives who have served in the U.S. Armed Forces, as well as the federal, state, local and tribal law enforcement who sacrifice their safety for the security of all. 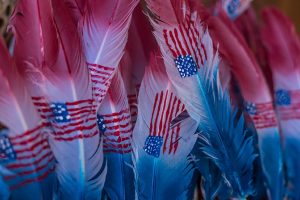