Getting Diverse Elders Ready For The 2020 Census

It’s 2020, which means the United States Census is coming!

It’s 2020, which means the United States Census is coming! By April 1, every home in the United States will receive an invitation to participate in the census, our once-in-a-decade opportunity to ensure that our communities are counted. Census results help determine how billions of dollars in federal funding flow into states and communities each year, and the results determine how many seats in Congress each state gets. To ensure that diverse elders, their families, and their caregivers are given the community support and representation that they deserve, the Diverse Elders Coalition is working with our members and partners across the country to promote the census.

Early last year, the U.S. Census Bureau released the results of the 2020 Census Barriers, Attitudes, and Motivators Study (2020 CBAMS), which highlighted some of the challenges and concerns that our communities have regarding the census, including:

Additionally, an attempt to add a question about respondents’ citizenship status has created even greater levels of distrust and fear around the census, especially among Hispanic and Asian American communities. There will not be a question about citizenship status on the census, however, these existing attitudes, when combined with language barriers and geographic isolation, mean that many of the older adults served by the Diverse Elders Coalition are at risk of not being counted in the 2020 Census. 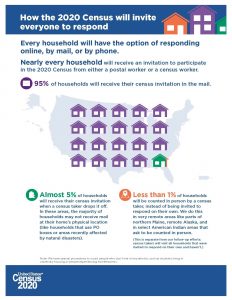 What to expect from the 2020 Census

For the first time, every household in the United States will have the option of responding to the census online, by mail, or by phone. Beginning in mid-March, most households across the country will receive an invitation to respond to the 2020 Census online. In May, the Census Bureau will begin following up with in-person visits to any household that has not yet responded. Areas of the country that are less likely to respond online will receive a paper questionnaire along with their initial invitation. The final day to complete the 2020 Census is July 31.

Where to get help

We’re working with our member organizations and other national partners to ensure that our hard-to-count populations are included in this year’s census. Over the next couple of months, we will share blog posts from each of the DEC’s six constituency groups highlighting some of their unique concerns, challenges, and strategies for ensuring that they are counted. More outreach materials can be found on the 2020 Census website. Some outreach materials that may be of interest to our readers include:

These and many other resources, in a variety of languages, are available now for printing, downloading, and sharing.

If you’re looking for a job, the U.S. Census Bureau is currently recruiting to fill hundreds of thousands of temporary positions across the country to assist with the 2020 Census count. You can learn more and apply at census.gov.

If you have questions about the census after receiving your invitation in the mail, help is available! You can contact the U.S. Census Bureau by phone at 800-923-8282 or ask.census.gov. State and local organizations can also find a partnership representative in their area by contacting their Regional Census Center.

Stay tuned to the Diverse Elders Coalition blog for more coverage of the 2020 Census! And connect with us on Twitter and Facebook to ask your census questions or share your story of how you’re getting the word out about the census in your community.

Original article by Jenna McDavid of the Diverse Elders Coalition