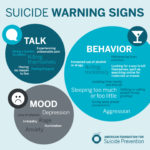 This year National Suicide Prevention Week is from September 10th to 16th. The week was created to raise awareness that suicide is a preventable cause of premature death. “Suicide is an international problem and a major public health concern. Suicide claims approximately over 800,000 lives worldwide each year, resulting in one suicide every 40 seconds. There […]