Members of the Pit River Tribe claim the U.S. Bureau of Land Management (BLM) has allowed Calpine Corporation to occupy their sacred land for decades, even as the company fails to meet lease renewal requirements to produce geothermal power. The Houston-based energy giant won a U.S. government contract in 1982 to explore geothermal energy on 2,560 acres of national forest in the Medicine Lake Highlands of Siskiyou County, California.

BLM is required to review the lease every five years and terminate if Calpine fails to show it can produce commercially viable geothermal power. According to the lawsuit, Calpine has not drilled or tested a geothermal well in the area since 1988, when it reported one site capable of generating less than five megawatts of electricity.

Plaintiffs argue that the tribe’s constitution is akin to a treaty and creates fiduciary duties for the federal government in its management of the area. Other plaintiffs in the lawsuit filed this month include Native Coalition for Medicine Lake Highlands Defense, Mount Shasta Bioregional Ecology Center and Medicine Lake Citizens for Quality Environment.

A six-year legal battle between a Native-owned gas station and the Washington Department of Licensing finally made its way to the U.S. Supreme Court last month. The gas station is considered a tribal entity because it is owned by a citizen of Yakama Nation, which, like 573 other federally recognized tribes, is a sovereign nation with treaties that ceded land in exchange for health care, education, and a trust relationship with the federal government.

The owner argued that he had the freedom to sell gas tax-free because a clause in the Yakama Nation’s 1855 treaty guarantees a right to travel without burden, and that therefore traveling with gas for sale should not be taxed. The state of Washington disagreed.

There’s was a lot at stake in this case: If the Supreme Court had sided with the state, the gas station would have had to pay $3.6 million in back taxes. It could’ve also set a precedence for other states to expand taxes on sovereign tribal nations.

Thankfully, the U.S. Supreme Court ruled in favor of the fuel distributor. The outcome of the case means that not only will they avoid millions in fees, but treaty rights will be protected for at least two other Western tribes in three states with right-to-travel clauses. 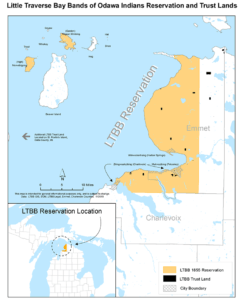 The Little Traverse Bay Bands of Odawa Indians has a case against the state of Michigan over whether the tribe has jurisdiction over 337 square miles of land in the northern part of the state. The land stretches along the shore of Lake Michigan and includes the city of Petoskey and part of Charlevoix. The tribe is not claiming they own the land, but that the land is a reservation and therefore they have the right to operate as a government entity to decide what happens there.

The cities of Petoskey and Charlevoix, along with the counties in the area, argue that the tribe relinquished their claim years ago, and failed to raise the issue with the Indian Claims Commission created in 1946. The tribe argues that a treaty signed in 1855 set the boundaries of a reservation that would cover the 337 square miles.

The case has become incredibly complex, with over 500 entries on the docket, including thousands of pages of arguments, historical references and expert testimony. The case began in 2015 but the judge says it could be 2020 before the trial even begins.