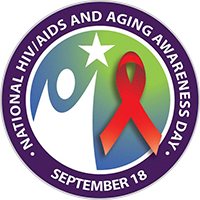 The US Department of Health and Human Services AIDSinfo website provides, “Each year on September 18, National HIV/AIDS and Aging Awareness Day is observed to call attention to the challenges that older Americans face in terms of HIV prevention, testing, care, and treatment.” (1)

In the United States 1.2 million people are living with HIV infection, and of this 1.2 million 26% are 55 and older. Furthermore, diagnosis of HIV in Elders is often late in the disease, as the “CDC reports that in 2014, 40% of people aged 55 and older were diagnosed with AIDS at the time of HIV diagnosis.” (1) This not only means

The National Native HIV/AIDS Awareness Day website states that over 3,600 American Indian and Alaska Natives (AI/AN) have been diagnosed with AIDS through 2008, and there are at least 2,300 AI/ANs living with HIV/AIDS. Furthermore, over 1,800 AI/ANs with HIV/AIDS have passed away. Studies through 2008 also show that although AI/ANs have the fourth highest rate of new HIV infections among ethnic groups, 11.9 per 100,000 persons, it has been found that AI/ANs diagnosed with AIDS have the shortest overall survival time. (2)

In more current studies, like the Centers for Disease Control and Prevention’s report titled Diagnoses of HIV Infection in the United States and Dependent Areas, 2015, many areas of HIV/AIDS concerns for AI/ANs have decreased, including AIDS diagnoses and deaths of those diagnosed with HIV/AIDS. However, from 2010 to 2014 the rates for AI/ANs diagnoses of HIV has shown increases. (3)

Visit the AIDSinfo website at tinyurl.com/y95sgy2z for more information on HIV/AIDS research and resources, and make sure you get tested. To find a testing facility near you, go to https://gettested.cdc.gov/