A new report by the U.S. Commission on Civil Rights found that Congress has done little in the past 15 years to fulfill its obligations to Native populations.

A new report by the U.S. Commission on Civil Rights found that Congress has done little in the past 15 years to fulfill its obligations to Native populations. The December report, titled “Broken Promises: Continuing Federal Funding Shortfall for Native Americans,” shows how federal spending for American Indians, Alaska Natives and Native Hawaiians has remained flat since the commission’s 2003 report.

The lack of funding has left tribes unable to tackle an epidemic of suicide, high dropout rates, opioid use, violence against women, and climate change. In cases where there were increases, the analysis found that it was not enough to keep up with inflation. 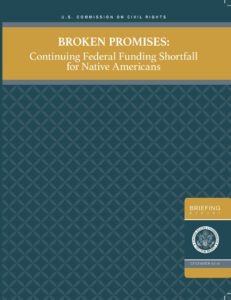 The report recommends Congress assemble a spending package that meets tribal needs. The fiscal year 2019 requests for more than 20 federal agencies and sub-agencies that serve tribes and tribal communities was about $20 billion — $2 billion less than what was enacted the previous year.

The report also makes a strong push for Native Hawaiians to receive the same benefits as federally recognized tribes. Native Hawaiians are the last remaining indigenous people in the U.S. who haven’t been allowed to establish their own government. The report highlighted several disparities for Native Hawaiians, from an inability to qualify for certain criminal justice grants due to a lack of federal recognition to the Trump administration’s proposed elimination of the Native Hawaiian Education Program.