The State of Tribal Elders

In 1978, NICOA successfully advocated for the passage of Title VI of the Older Americans Act (OAA). In 1981, NICOA conducted a national study to determine which age tribal communities consider to be “elderly”. The data resulted in enabling tribes to self-determine the age at which they considered “elderly”; whereas, in the non-Indian world the age was established at 60.

After 43 years, NICOA is still advocating on behalf of the nation’s tribal elders. It is recognized by other national aging organizations as the leading organization representing tribal elders and their needs. The following issues represent the State of Tribal Elders that NICOA is working to minimize, mitigate and ameliorate, but are a fraction of the overall needs.

The need for long-term services and supports, based on the health status of American Indians and Alaska Natives, can best be demonstrated by the following:

This population will require intensive and specialized care as the disease progresses. Currently, caregivers are family members who are untrained to provide this level of care. Additionally, this will undoubtedly put a strain on the caregiver, the family and the community mentally, physically and financially.

Federal agencies are required to consult with Indian tribes on any action that would have an impact on their programs and this requirement is an acknowledgment of the unique “government-to-government” relationship that tribes have with the federal government. No tribe was consulted about the realignment.

The issues, concerns and needs of the nation’s tribal elders are great and immense. As dire as they are today, they will increase exponentially over the next decade. NICOA intends to be at the forefront of these issues and provide recommendations for interventions.

As a result, NICOA believes that with the reauthorization of the Older Americans Act (OAA) this year, the Act needs to be amended to ensure that timely and appropriate services are available Indian communities and tribal elders. Our recommendations for amendments are as follows: 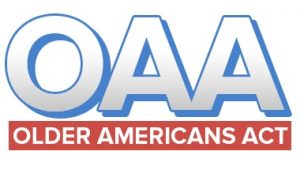